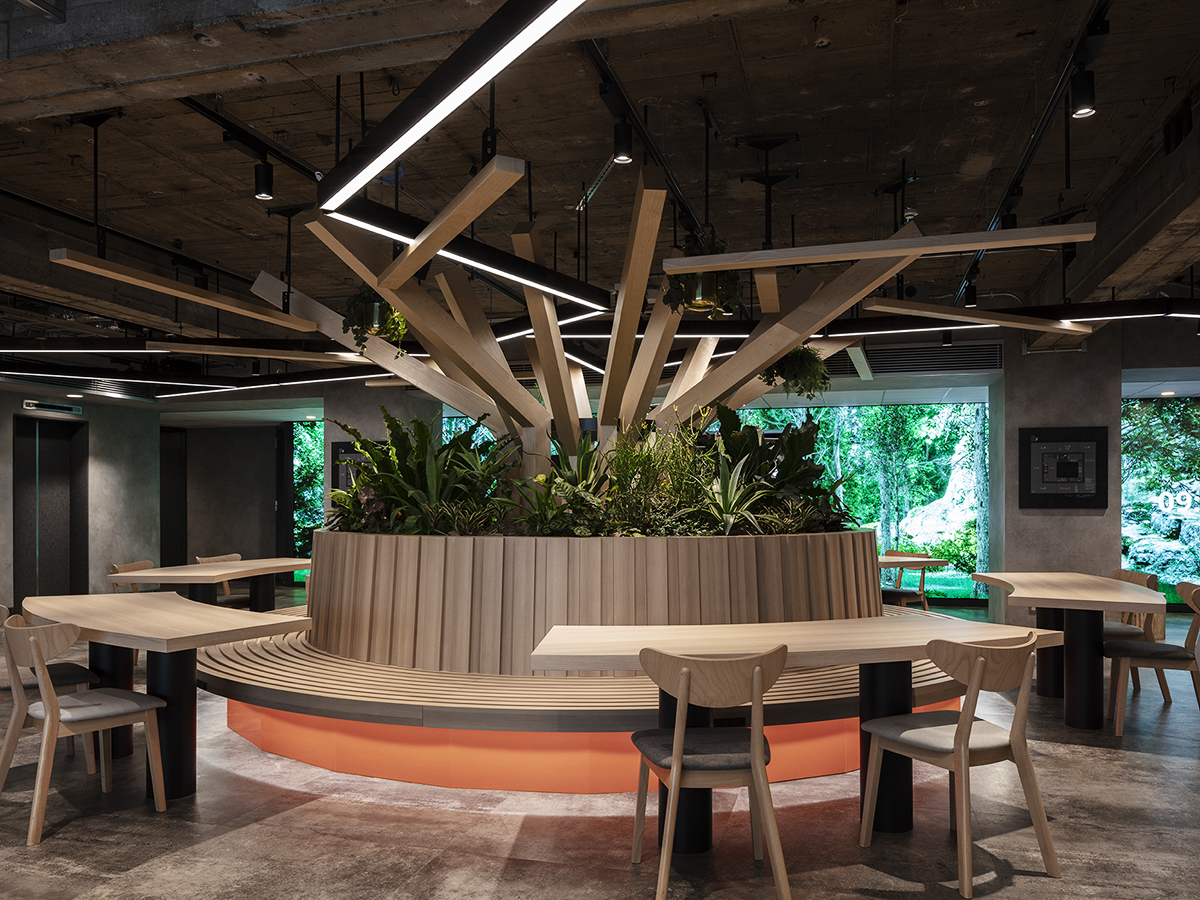 A base where new businesses emerge and "CO-EVOLUTION" continues to emerge.
In creating a place for innovation, it is necessary to create a space that is unfinished and leaves room for refinement and suggestions. At first glance, the space may appear chaotic, but we aimed to create an unfinished place that is always vibrant and continues to evolve.

Also, if the traditional office is a place for logical thinking, we wanted to create a mechanism that would fuse the experimental element of creative thinking in the Lab (research laboratory) and create a chemical reaction. The intent is to bring diverse people together, induce contingency, and initiate co-creation.

1.「CORE & SYNAPSE」
Each area has a core area, and the lines of flow that organically connect these areas are expressed as synapses. On the flow lines connecting each area, showcase wagons are set up to display the latest technology, with the intention of creating new discoveries.

2.「BIOPHILIAC SPACESHIP」
As a design element, we have incorporated wood, a natural object, into futuristic geometric shapes. While creating an unexpected surprise, the warmth of the wood creates a cozy space.

3.「TECH FARM」
The theme of the park is "the fusion of technology, plants, and nature," and the meeting spaces and technology showcase are lushly landscaped. The park is named after the Deloitte Tohmatsu Innovation Park, and the atmosphere is designed to make people feel as if they are gathering in a park.

We developed a web application to accelerate the concept of "CO-EVOLUTION". We started by organizing the target customers (users of the facility), which had been set as a whole, in order to consider the UX. As the possibilities expanded as a center for co-creation innovation, we narrowed down the focus based on the business strategy, and made improvements through a series of on-site prototyping, design, and production.

The released application will continue to develop as an application to support innovation as Deloitte Tohmatsu Innovation Park evolves.

If you have any questions about our work,
please feel free to contact us.